Everyone thought the Martians had died. In a sense they had.
But they left behind seeds that grew into even more horrible monsters and caused waves of genetic mutations. It seemed the Earth would be overgrown by this new alien ecosystem.

Humans with knowledge of ancient magic and weird science desperately tried to use the salvaged Martian technologies to  fight back this new threat.

Legends from every culture throughout the ages say there is another world.
An alternate world that is connected to Earth like a shadow.
A hidden realm made from the stuff of dreams and nightmares.

Most of the paths and gates to this world have been obscured or locked for millennia.
Now strange magic and arcane energies unleashed on Earth have spoiled  and eroded many forgotten portals to this mystic world.
Creatures thought to exist only in folklore are stepping through...

Gamma Red Death World is a game set on Earth in the late 1800's after an alien invasion. It uses Labyrinth Lord and Mutant Future as the core rules.
The main reason being the game will be available for FLAILSNAILS crossover play on Google+.
Another great reason is the fact that these games are available as free pdf downloads on Goblinoid Games website:
Labyrinth Lord PDF
Mutant Future PDF

STEP ONE - Abilities
Roll 3d6 for each ability and write them down in the order rolled.

STEP THREE - Skills
Refer to the skill lists at the bottom of this post.
All characters roll two random General skills, then choose an additional General skill.

Clerics, Magic-Users, Androids, Dwarves and Elves also get to roll one random Scholar skill, then choose one additional Scholar skill.

Any character may trade two General skills to choose one Scholar skill.
Skills can only be rolled or chosen once. Re-roll duplicates.

All characters use Wisdom as Willpower for mental combat.

STEP FIVE - Power Points
Choose spells or roll for mutations as appropriate for character class.
The following rules replace the normal rules for spell memorization and mutation use:

Power Throws
Classes with powers, spells, mutations or psionics have a new score called power points, based on one of their attributes.

Success: If the power throw is equal to or less than current power points then the power works as written in the rules. Subtract 1 point from power points.

Failure: If the power throw is greater than current power points then power fails to work. Subtract 2 points from power points.

Backfire: If current power points are 8 or less, each time a power throw fails something bad happens.
Characters recover 1d4 power points per level every 12 hours.
Total power points cannot be greater than the ability score they are based upon. 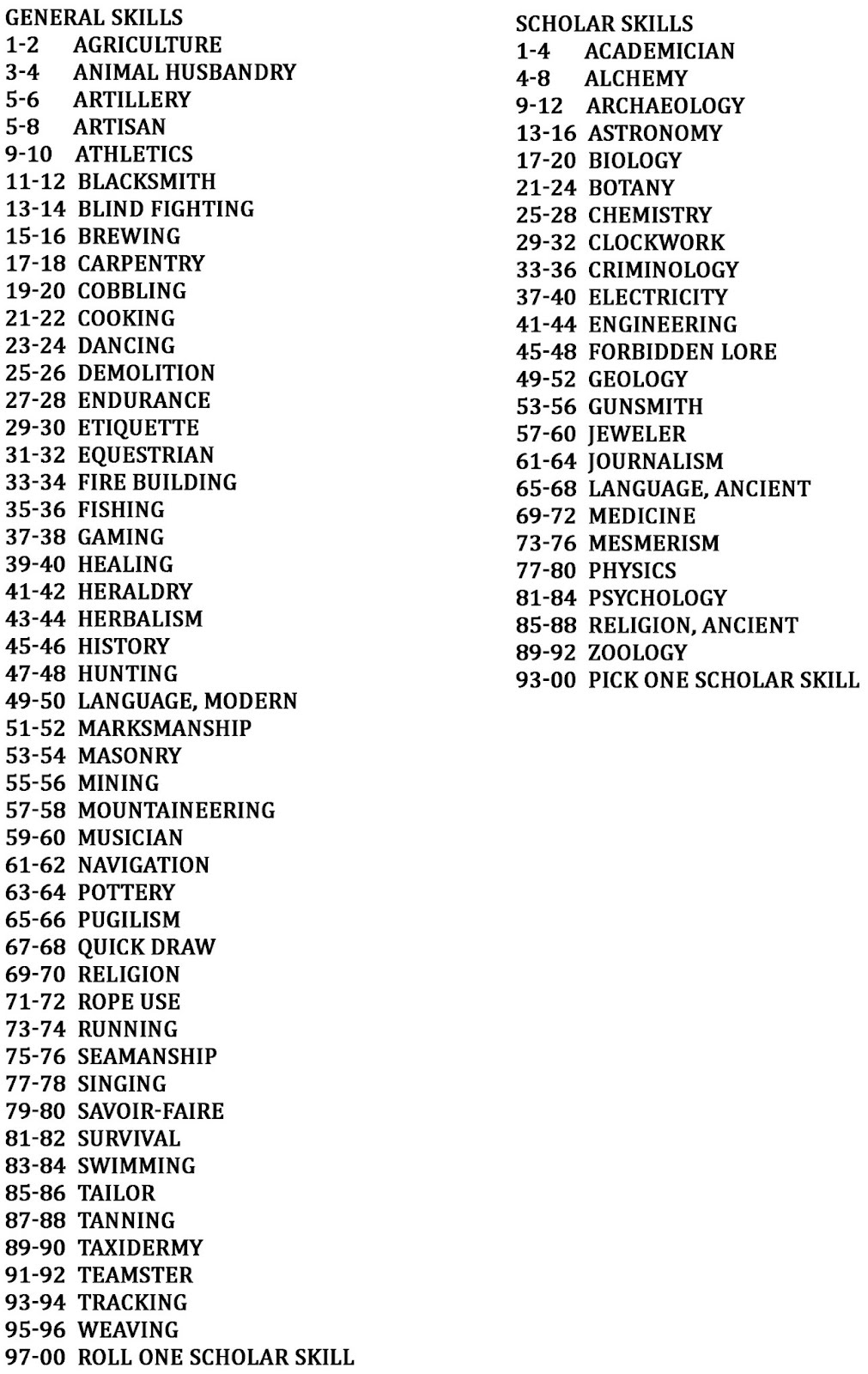